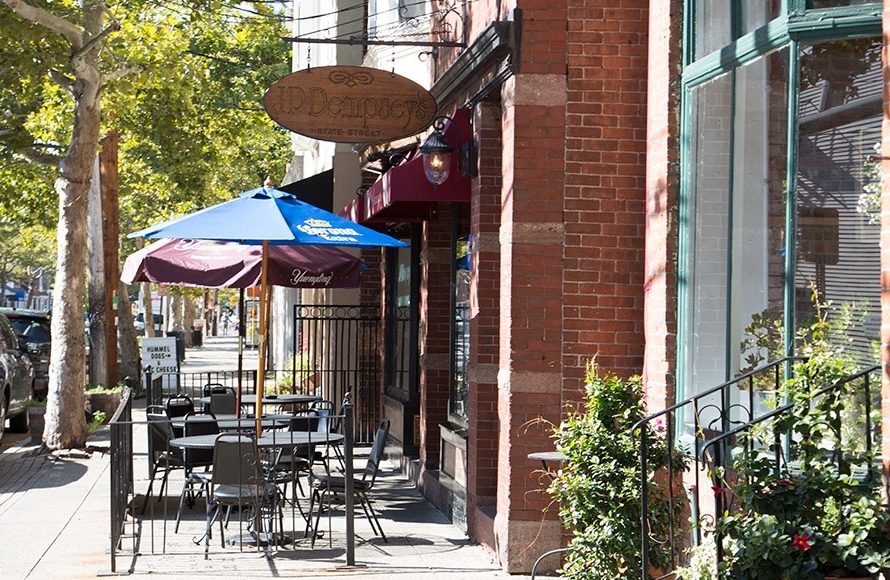 Last time, we gave you an overview of Corsair and its history. In this dispatch, we’ll tell you more about our neighborhood, East Rock. The area is in demand among people seeking apartments for rent because it’s convenient to downtown, Yale and Yale-New Haven Hospital, but quieter, greener, and more “neighborhoody.” It’s a popular neighborhood for grad students, post-docs, and young professionals. However, people of all kinds enjoy East Rock’s cozy, leafy surroundings. You almost always hear the term “leafy” used to describe East Rock and it’s not surprising: it is home to a 425-acre park, after all.

To start, the lay of the land: the neighborhood is roughly bounded by Whitney Avenue to the west and I-91 to east, East Rock Park to the north and somewhere around Bradley Street to the south. In other words, the neighborhood starts about a mile north of downtown. The neighborhood namesake and landmark is East Rock Park, itself named for the trap rock ridge that soars above New Haven and bookends the city with another formation, West Rock. The neighborhood has three main thoroughfares: Whitney Avenue, Orange Street, and State Street, home to Corsair. We’ll explore these streets and some surrounding areas next.

Whitney Avenue, which is also Connecticut Route 10, has stately mansions, the Yale School of Management and the Peabody Museum of Natural History. The block that includes the Peabody also forms the lower edge of Science Hill, Yale’s science campus. If you want the most scenic stroll to downtown, Whitney Avenue is your route. Walk in the opposite direction and you’ll come upon the lovely granite-walled Edgerton Park. At 20 acres, it’s tiny compared to East Rock, but these grounds have many charms, including Tudor-style outbuildings that evoke an English estate and greenhouses where you can escape the cold in the winter. The area to the north between Whitney and Prospect Street is known as Prospect Hill, home to the Divinity School campus, Yale’s Leitner Family Observatory and Planetarium, and Albertus Magnus College. This area has some of the fanciest old houses in New Haven and is worth a walk for the architecture and views. Take your dog and you can visit the Divinity School’s dog park on St. Ronan Street while you’re there.

Right through the middle of East Rock is Orange Street, the heart of the neighborhood. Orange Street is mostly residential, with a smattering of well-loved businesses, including an old-time pharmacy and a Middle Eastern grocery/falafel shop. Orange Street also has a favorite feature of East Rock, three neighborhood food markets: Romeo & Cesare’s Gourmet Shoppe, Nica’s Market, and P&M Orange Street Market. (Note: Romeo’s, as it is known, is separate from Café Romeo, its offshoot.) To say that these neighborhood shops are just a fill-in between supermarket visits is to undersell them, however. If you want imported cheeses and cured meats (all three specialize in Italian food), fresh produce (at Romeo’s, it’s sometimes local), baked goods (this is the closest Italian pastry without going to Wooster Square), and serious sandwiches (anything Parmesan is a good bet), you’re in the right place. All three have outdoor seating, and enjoying a sandwich while your neighbors stroll and roll by is one of the great East Rock pastimes. Orange Street is also the main access to College Woods, an area of East Rock Park that, despite its name, is mostly open field.  Also worth noting: Orange Street has what is probably New Haven’s longest uninterrupted bike lane.

And finally, there’s State Street, the liveliest and most commercial of the three, but by no means a noisy main drag. The business district gives the street its own identity within East Rock. You’ll often hear people refer to the dining area as Upper State Street, the name of the local business association. Many old-time New Haveners also call the area Goatville, so named because people kept goats in the neighborhood around the same time that many factories hummed nearby. The brick and wood storefronts from this period and the early 20th century retain many of their original details — you can picture the factory workers of old stopping by for provisions on their way home from work. This well preserved architecture, along with the neighborhood’s role in New Haven’s manufacturing history, earned this stretch a designation as a historic district. Fittingly, the New Haven Preservation Trust, the local historic preservation advocacy group, has its office here. Check their window for displays about the city’s architecture and news about walking tours.

Most notably, State Street, along with Wooster Street, has New Haven’s greatest concentration of restaurants outside of downtown. While Wooster Square is New Haven’s Little Italy and its restaurants reflect that distinction, Upper State Street’s selection of bars and restaurants rival downtown’s for variety. You’ll find Thai, Mexican, and Chinese, among other international offerings. For drinking, there’s a wine bar, a tequila bar, a beer-and-wings kind of place, a farm-to-table eatery that also makes serious whiskey cocktails, and even a cozy cocktail and oyster bar. This being New Haven, famous for its pizza, there are, of course, places to get a pie—and very solid ones at that. Modern APizza has been an institution since 1934 and is one of the city’s most revered, while Da Legna represents the contemporary take on traditional pizza making.

After all that food, you might need a little exercise. State Street has Walker Rink, the city’s public ice skating venue, right next to Corsair. You can take lessons here or just go for open skating hours in the winter.  Like Whitney and Orange, State Street also offers easy access to East Rock Park. Adjacent to Corsair is Blake Field, used by local schools and for adult recreational softball leagues. We’ll talk in more detail about the park next time.