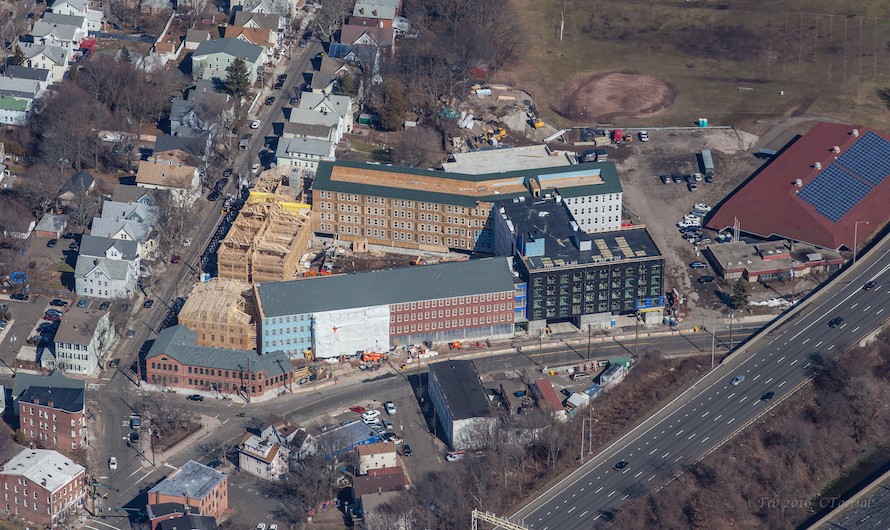 So, you’re looking for apartments to rent in New Haven, Connecticut? Maybe you know that East Rock is a great neighborhood to live in—convenient to Yale, local colleges, and downtown, with the serenity of beautiful East Rock Park yet the buzz of a lively restaurant row. The only problem is, modern luxury apartments have been hard to come by in the neighborhood, a leafy stretch of New Haven filled with picturesque older homes. Enter Corsair. It’s a new apartment community with old roots in Connecticut’s most vibrant city.

What’s in a name?

But first, why are these apartments called Corsair? The name comes from a World War II fighter plane, the Vought F4U Corsair, whose distinctive propellers were manufactured where the new apartments for rent are now being built. This storied plane, considered by many the finest carrier-borne fighter of the war, was flown by Charles Lindbergh in the Pacific and in use by the U.S. Navy and Marines until well into the 1950s. Key to the plane’s performance was its solid aluminum, three-blade propeller that spanned more than 13 feet—the largest on any fighter aircraft of the time. These revolutionary propellers were depicted in scenes of flight on the facade of M.B. Manufacturing, the circa 1940s Art Moderne building on State and Mechanic streets. You’ll be able to see these raised relief panels in the new building’s fully-equipped gym. Of course, the word corsair—it means “pirate”—has even older cultural associations. English grad students and music scholars will know that “The Corsair” was a poem by Lord Byron that later became an opera by Verdi. (Smarties.)

The site’s industrial history goes back much further than the jet age, however. According to one New Haven author, the earliest business at what is now Corsair was Thomas Forsyth’s Elm City Dye Works and Steam Laundry in 1880. That company later offered “Dyeing, Laundrying and Bleaching”—services you won’t need today because every apartment will come with its own washer and dryer. Over the years, long before the present-day rental apartments, everything from carriage locks to cigars to rifles was made right here. Even the company that made the first corset outside of France, Strauss & Co., has its roots at 1050 State. You could write a book about manufacturing in New Haven, and some have. For the short version, try this telling from the Daily Nutmeg, New Haven’s own guide to food, arts, and events around town.

One of the few industries that didn’t succeed was steamboat building, but the audacity of the attempt merits a brief mention. (The full story, told by Colin Caplan, is here.) In the 1880s, a local character named Milton Stewart set out to build a steamboat atop what is now East Rock Park. Oddly, choosing a 350-foot summit as the workplace for this endeavor instead of a more logical location along the Mill River wasn’t what sank him. Rather, the city’s seizure of his land for East Rock Park forced him to abandon his dream—terrible for him, but lucky for all of us who can now enjoy 425 acres of natural splendor. His next venture was a row of 12 houses along State Street that neighbors dubbed “Stewart’s Dirty Dozen” for their faulty sewage systems. It’s one of the more colorful nicknames that has been used around the site, no small feat for an area once known as Goatville for the does and billies that roamed its streets.

Today’s Corsair is actually two buildings. The historic 1880 factory at 1040 State has been completely restored outside and renovated within to become three premium apartments on the top floor and a future restaurant below. (For now, it’s our leasing office.) Under construction in time for leasing this spring is 1050 State, a new apartment building incorporating many reclaimed materials from the site. Antique wooden trusses that one soared above a shop floor will become custom furniture by local artisans and crafters in a cozy lounge and library. Old factory windows are being upcycled to line the hallway of the amenity space. History will also shine through several of the decidedly contemporary works of art commissioned for the building. Made by artists from New Haven and beyond, these artworks show the creative side of Corsair.

At home in the neighborhood

Even with open plans and high ceilings and polished concrete floors in the style of vintage lofts, Corsair will offer modern comforts like restaurant-style kitchens and smartphone-programmable Nest Learning Thermostats. And that’s not even mentioning the amenities that will be shared by neighbors like a courtyard with direct views of the East Rock Summit, a pool, outdoor movie screen, and grilling stations. There’s even a communal pizza oven—certainly the only one at a New Haven rental apartment and possibly the first for any apartment anywhere. It’s a new idea as well as a tribute to one of New Haven’s proudest distinctions. Did we mention that our part of East Rock (a foodie destination known as Upper State Street), is home to one of New Haven’s legendary, nationally-ranked pizza places, Modern Apizza? (Seriously: the place is so renowned that TV crews show up regularly.) And that’s only one dining option that you can walk to from your apartment. (Mexican food standout Mezcal and Thai cuisine favorite Rice Pot are literally steps away.) But more on our neighborhood in the next installment.