This New Haven apartment building’s table has an amazing story 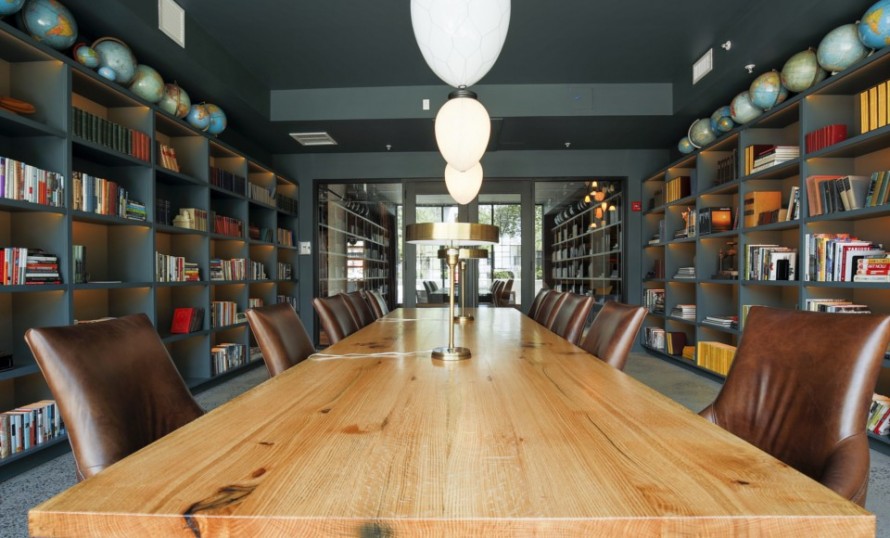 As tables go, you’d be hard pressed to find one with a more compelling backstory than the library table at Corsair. The New Haven apartment building fixture comes with a tale of modern-day craft and ingenious upcycling. Plus, there’s historic intrigue and just a little spookiness.

A tree with a history…and a little mystery

The table’s tale starts not at a New Haven apartment, but on the New Haven Green. It’s here at downtown’s 16-acre landmark square that the majestic Lincoln Oak once stood. The tree was one of many planted around the country in 1909 to commemorate the centennial of Abraham Lincoln’s birth. New Haven’s tree was planted where the Connecticut State House stood from 1828 to 1889. It’s the same location where public prayers took place after Lincoln’s assassination.

The venerable pin oak remained on the Green until 2012, when Superstorm Sandy uprooted the colossal tree. Things got interesting when the tree’s roots revealed a skeleton—right before Halloween, even!—reminding New Haveners that the Green was once a burial ground. Beneath the tree were also two time capsules, relics from the Green’s long history. Questions about these finds prompted archeological research that shed new light on life in 18th century New Haven. Meanwhile, the city’s Lincoln Oak saga got national press.

Recycling get exciting at a New Haven apartment building

Fast forward a few years, when the team behind Corsair started to commission custom furniture and artwork for the New Haven apartment building. Corsair chose City Bench, a Connecticut woodworking studio that creates furniture from reclaimed wood and urban trees, for the library table and the bar. As it turns out, the studio had previously made furniture from the Lincoln Oak—a bench for New Haven City Hall. Other wood from the oak had already found its way to local artists for a 2014 sculpture show at the New Haven Museum. The historic tree had even turned up as handmade bowls. But, importantly, there was still wood left.

An old source for a new (haven) apartment building

Corsair bought its Lincoln Oak wood directly from the Committee of the Proprietors of the Common and Undivided Lands in New Haven, the little-known self-perpetuating body that has watched over the Green since 1640. And then City Bench got to work. Founded by brothers Ted and Zeb Esselstyn, the firm gets much of its material from New Haven. When a tree falls in town, it isn’t automatically destined to be mulch. Instead, it might go to City Bench’s sawmill, about a mile from Corsair at East Rock Park. City Bench mills the trees there and transforms them into furniture at its studio in Higganum, a town on the Connecticut River.

Today, the Lincoln Oak table anchors the Corsair library, a quiet place for residents to read and browse the New Haven apartment building’s 1,400 borrowable books. With its view into the courtyard, it’s also a favorite study room and home office for Corsair residents. On any given day, you’ll see the table adorned with laptops, coffee cups, and books. But if you look at the side of the table, you’ll see a carved leaf and acorn detail, a reminder of the table’s origins.