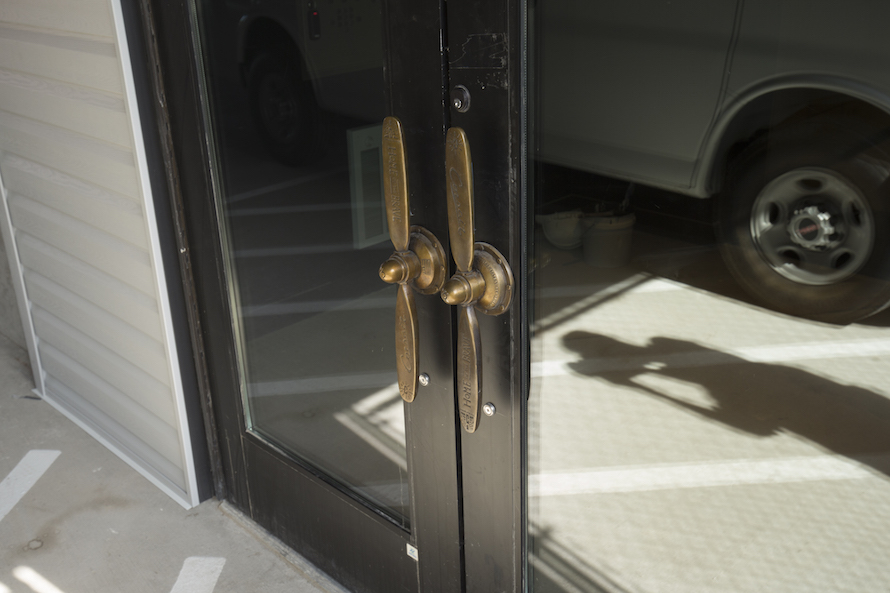 They’re the first thing you touch when you visit Corsair, before you even see into the new apartments in New Haven. And they owe their look and feel to the person who made the dinosaurs so scary in Jurassic Park or the space creatures so alien in Alien: Resurrection.

They’re the propeller-shaped door handles on every entrance of Corsair and they come from the studio of Jeff Buccacio. He’s a Boston-area sculptor and art conservator whose credits include special effects for movies,  monuments and memorials for cities and towns, and the restoration of local landmarks in New England.

The door handles pay tribute to the World War II fighter plane from which our new apartments in New Haven take their name, the F4U Corsair. The plane’s propellers were manufactured on State Street where our apartments now stand. The handles are a small monument to site’s history.

“It’s like an extension of what that building was,”Buccacio told us.

From movie monsters to monuments to new apartments in New Haven

The commission for Corsair is a shift from Buccacio’s earlier career in Hollywood, where he sculpted aliens for the Men in Black series and creatures for the X-Files movie. Since moving back to his native Massachusetts from Los Angeles a decade ago, he has focused mainly on commemorative work. Occasional architectural hardware projects, like those for Corsair’s new apartments in New Haven, round out his portfolio.

“The movie stuff is great, but it’s very fulfilling to do the commission work we’re doing,” he said.

Buccacio has made memorials for veterans and has even restored a World War II memorial, but this is his first commission related to aircraft. As an avid flyer of remote-control planes and a history buff, he relished the chance to add to the new apartments in New Haven. From a design standpoint, he also appreciates the elegance of the original propellers.

“When you think about what they do, they just dance in the wind,” he said. “The inherent nature of what they do makes them beautiful.” 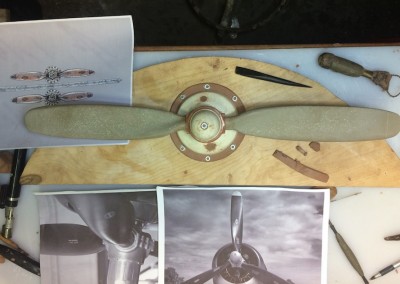 Buccacio Sculpture Studios studied old photos of  the Corsair propellers before creating sketches and models as part of the design for custom door handles for the new apartments in New Haven.

The Corsair’s propellers were notable for their sheer size—13 feet across. The wide span explains one of the aircraft’s distinctive features, the “inverted gull-wing” design. This unusual wing shape—it looks like the wings are upside-down—made it possible for the large propellers to clear the ground. Buccacio’s challenge was the capture their grandeur at a smaller scale—about 18 inches tall.

At Buccacio Sculpture Studios, the first step of making a sculpture is research. Buccacio and his wife, Nina—his partner in the studio—found old photos of the airplane. She then drew a sketch as a starting point for a clay model. They soon decided to modify the design and reduce the propellor’s three blades to two. This would make it easier to mount the form on posts and use it as a door handle. 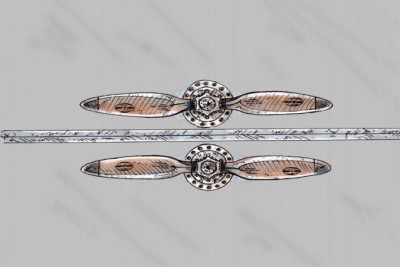 Next, Jeff Buccacio made a clay model and tested it to make sure it felt good to use. The model went through several revisions, including modifications to its back to make it more comfortable to grab. 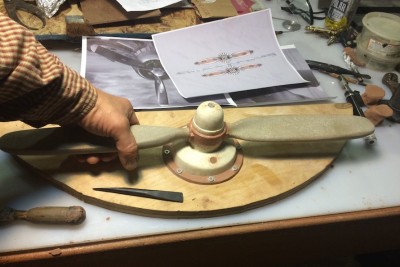 Jeff Buccacio tests a clay model that will be used to create propeller-shaped door handles for Corsair, apartments in New Haven. The building is named for the airplane whose propellers were made where the apartments now stand.

In later versions, Buccacio embellished the handles with “doodles”—a series of sketches created by the firm Proverb as part of Corsair’s identity. These bits of handlettering include phrases from and inspired by the site’s history, as well as Corsair’s address. These sketches also appear on custom fabric on some upholstered furniture in the lounge. 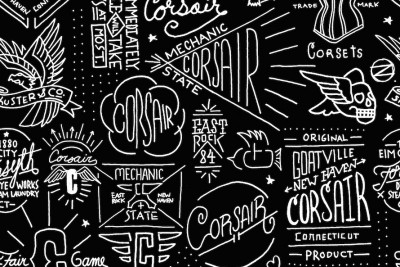 This handlettering is the basis for inscriptions on the custom door handles at Corsair. Several artists were commissioned to create new works for the apartments in New Haven.

Buccacio follows a similar process for all of his bronze sculptures, one based on an ancient technique. Once satisfied with how the model looks and feels, he makes a mold of it in silicone and plaster. From that comes a wax cast, which is dipped in ceramic. Next, the wax is poured out and the ceramic shell remains. Bronze is heated in a gas furnace at 2,000 degrees F. Then the molten metal is poured in. Once hardened and cooled, the bronze cast is sanded and buffed by hand to make it smooth and sleek, “almost like a car,” Buccacio said. 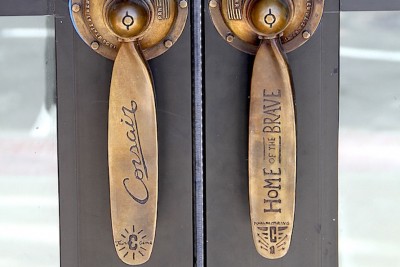 In this detail of the finished door handles installed at Corsair, you can see inscriptions inspired by the history of the site of these new apartments in New Haven.

The artist hopes that people passing through the doors of Corsair realize how much thought when into his functional sculptures, though he acknowledges, “some people will just use it as a door handle.” Still, he said, when you touch the handles, he said, you can’t help but be engaged with the artwork. Thinking about that—people using his work—brings him great satisfaction.

“It’s a very rewarding experience on a personal level,” he said. “I love to know that people are enjoying it.”