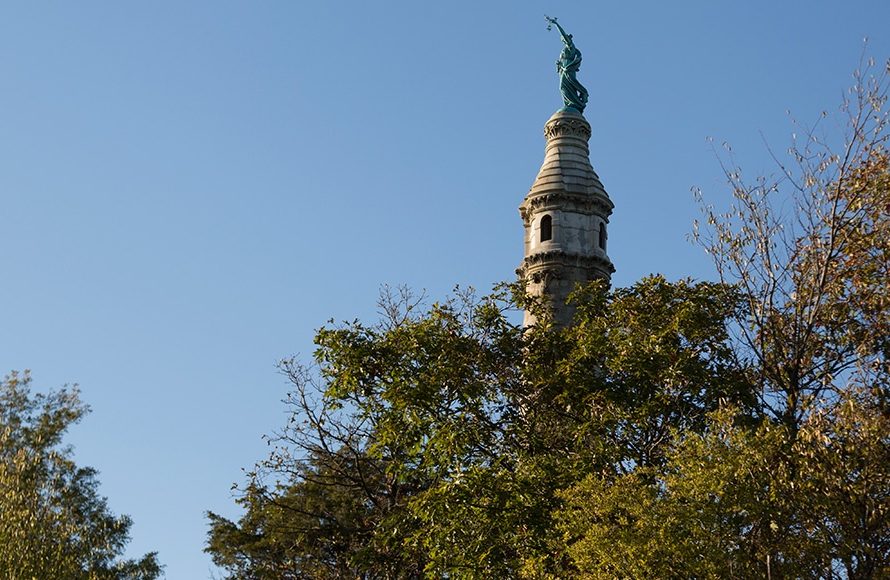 With a sprawling roof deck and courtyard, there’s no shortage of outdoor space to enjoy at Corsair. But what if we told you that when you rent your apartment, you also get the best backyard in New Haven? You do and it’s called East Rock Park. Let’s explore this city gem and East Rock neighborhood namesake. There’s a lot to see steps away from your apartment.

The main attraction of East Rock Park is the summit, which offers views to New Haven Harbor and Long Island Sound. (And the neighborhood. Look! There’s your apartment at Corsair!) It also gives you a close-up look at the Soldiers’ and Sailors’ Monument. This is the landmark memorial from which the Angel of Peace watches over the city. The monument, a graceful statue-topped column, can be seen from I-91 and from some Corsair apartments. 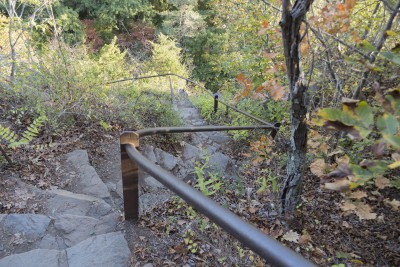 Getting to the top at East Rock

Getting to the peak is a short hike. East Rock Park has several blazed trails, most a mile or two long. (See this map for details. There’s also a good description of East Rock’s trails at Connecticut Explorer.) The most famous of these paths is the Giant Steps Trail. This route is exactly what it sounds like—big, stair-shaped slabs of stone. If you want to take advantage of the view without tromping through the woods, there are also paved roads. English Drive has the feel of an old carriage road. Or take Mitchell Drive if you’re going by car.

The park without the hike

If an uphill hike or ride is not in the cards, go to College Woods. This part of East Rock Park was long ago donated by Yale, which once used it as a source of firewood. College Woods now includes a picnic pavilion, playground, and Trowbridge Nature Center. Every April, it’s the end point of Rock to Rock, the city’s Earth Day bike ride and celebration. To get there, enter from Cold Spring and Orange streets. The landscaped entrance is about a 10-minute bike ride from Corsair. Notice that next to the College Woods gateway is the canoe and kayak launch. It’s by the Orange Street bridge over the Mill River. 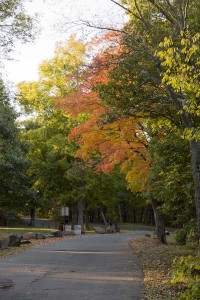 A walk in the park.

If sports are your game, East Rock Park has fields for football and soccer and courts for tennis and basketball. Closest to Corsair is Blake Field, the park’s baseball and softball fields. Looking for a team? The New Haven Umpires Association runs an adult softball league that plays here. If kickball is more your speed, there’s also the long-running CT Ivy team. New to the field this season is an ultimate frisbee league.

To get full enjoyment out of East Rock Park, you’ll want to follow the Department of Parks, Recreation and Trees. (Or sign up for their mailing list.)  Look for free programs like bird walks and even occasional canoe and kayak trips. Another good resource is Friends of East Rock Park, known as FERP. This all-volunteer group has a crowdsourced map where you can view comments from park visitors or add your own points of interest. FERP also sponsors regular park clean-ups, a great way to get involved in the neighborhood. In addition, their annual fall chili cook-off is a big East Rock social event. Enter the contest and show off those cooking skills you’ve honed in your new apartment kitchen or just visit and meet your neighbors outside Corsair.